With Arbor Sightline and Arbor Threat Mitigation System in Xtel’s environment, the network operation center is able to respond to events in less time with greater precision.

For fifteen years, Xtel Communications, Inc. has provided fiber optic networking, Cloud and Voice services throughout the northeast United States, to businesses, schools and governments. Providing the highest level of service reliability is paramount for Xtel’s commitment to high customer satisfaction and excellent quality of service.

As a part of their business continuity plan, Xtel made the decision to transition their infrastructure to the cloud. Xtel assessed the potential complexities of an open hybrid infrastructure and were determined to find a security solution that offered both DDoS protection and visibility into current and future threats.

The lack of visibility into network traffic and the inability to provide protection against distributed denial of service (DDoS) attacks were becoming a significant challenge for Xtel’s network team.

“A team of Tier 2 engineer were responsible for proactively monitoring and addressing network alerts at our NOC. However, the legacy IPS IDS systems we had in place constricted us [XTEL] with capacity limitations.” said Harbinder Goraya, director of engineering, Xtel Communications.

Previously, Xtel had a legacy IDS (Intrusion Detection System) and IPS (Intrusion Prevention System) running at the edge. Those devices were able to provide basic DDoS protection capabilities. As bandwidth demands increased, DDoS attacks became more common as did service and performance issues. It was clear that a purpose-built and proven DDoS mitigation solution was required.

Xtel began its search with a list of specific requirements to address their business goals. They required a solution that could be used to protect their own infrastructure and deliver a best in class solution for their customers as well.

They were looking for a multi-tenant portal so customers could see alerts; utilize in-line or out-of-band deployment options; auto mitigation templates based on various countermeasures and mitigation scalability to 80 Gbps. What Xtel found in NETSCOUT® Arbor was the very team that helped create the DDoS managed services market, who for the past decade has enabled more than 70 service providers to deliver DDoS services to their customers.

NETSCOUT Arbor was able to deliver a customized solution that was aligned to Xtel’s business goals.

“We did our research and NETSCOUT Arbor’s reputation and footprint in the market were the key motivators for us to take a closer look. We knew we needed both a DDoS and a visibility solution. NETSCOUT Arbor customized a solution that fulfilled all of our stated requirements.” said Harbinder Goraya, Director of Engineering, Xtel Communications.

Arbor Sightline scales on physical and virtual instances to provide comprehensive DDoS detection across an entire service provider network, from the customer edge to the peering edge to the data center edge (or cloud edge) to the mobile edge, including the backbone network in-between. With this unparalleled visibility, Arbor Sightline’s workflows enable quick effective mitigation of any DDoS attack via NETSCOUT Arbor Threat Mitigation System.

Arbor Threat Mitigation System also simplifies and streamlines operations by providing the ability to view and manage up to eight terabits of mitigation capacity from a single point of control. This provides the ability to thwart multiple, large-scale attacks and produce comprehensive reports that summarize the mitigation process for customers and/or management. 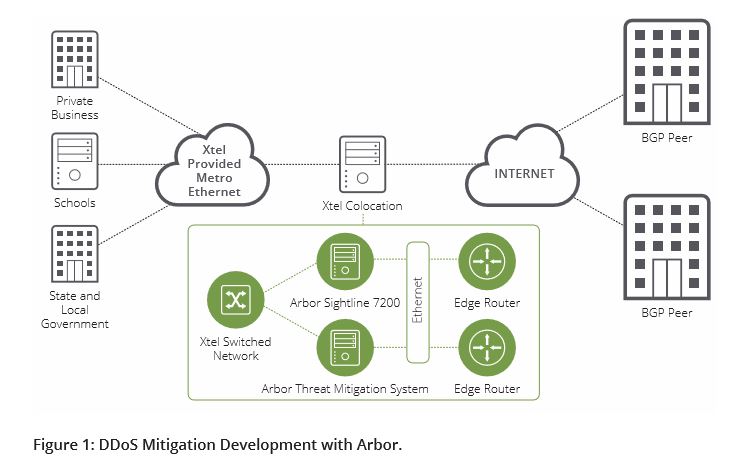